You are here: Home » Our Founder 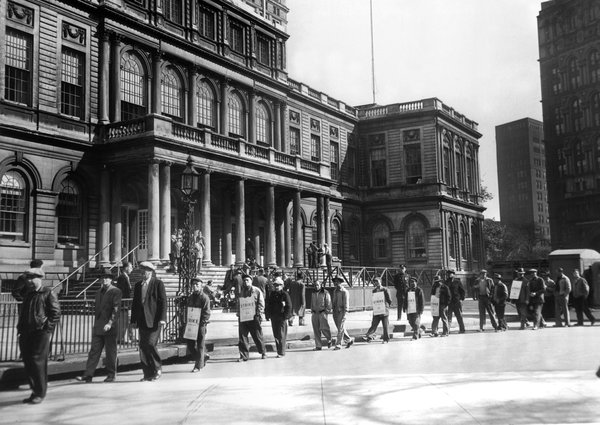 In 1951, Mr. Johnson helped lead a strike by dock workers against their union in New York.

Peter Johnson was 17 when his father, James, a longshoreman on the Manhattan docks, died. James was owed pay that the family needed for his burial. Peter had to beg the corrupt longshoremen’s union to get it. 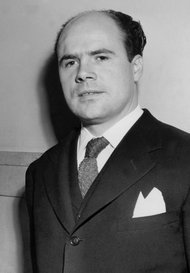 Peter was left with a sense of righteous outrage that fueled a personal crusade to fight union bosses who colluded with gangsters, conspired with shipping companies to underpay workers and demanded kickbacks from workers’ pay. In 1951, he helped lead a 25-day wildcat strike by 30,000 longshoremen against the companies and their own union.

That same year, he took on the corrupt political bosses who controlled Tammany Hall, as the Democratic Party organization was known, blasting them for consorting with criminals and using their power to monopolize the hiring of city employees. He ran slates of delegates to unseat the Tammany kingpins, personally challenging Carmine De Sapio, Tammany’s chieftain, as Democratic district leader in Greenwich Village.

Mr. Johnson, who went on to be a respected corporate lawyer, was a blur of motion. By the time he was 30, he had been a New York City police officer and a Marine who was severely wounded on Iwo Jima, and had graduated from law school and started his own practice — not to mention having slugged it out with Gotham’s despots.

And by the time he died on Monday at 91, his life had added up to an old-time New York ideal: street smarts and raw ambition welded to a hard-nosed commitment to justice. In his battle for the men who loaded and unloaded the great ships, an ally was the Rev. John M. Corridan, whose work with abused longshoremen inspired the character Father Barry, played by Karl Malden, in the 1954 movie “On the Waterfront.”

Peter James Johnson was born on Oct. 19, 1921, on the third floor of a cold-water tenement on Morton Street in Greenwich Village. He had episodes of pneumonia, and a doctor told him he would die at age 9 or 10. He read voraciously in bed and won a scholarship to La Salle Academy on the Lower East Side of Manhattan. His health improved enough to play basketball.

The week he graduated, his father died at 37, and Peter went to work on the docks, passing up his admission to the Naval Academy. With his mother making only a seamstress’s wages, Peter had to help support his five younger brothers and sisters, as well as four orphans the family had taken in.

He went on to join the New York Police Department, walking a beat on the Lower East Side, and enrolled at St. John’s University. During World War II, he joined the Marines, becoming a drill instructor. He took the last platoon he trained to Iwo Jima, where gunfire shattered his arm. He spent a year in Navy hospitals.

Mr. Johnson returned to St. John’s on the G. I. Bill, then entered its law school. He also rejoined the police after proving he could shoot with his left hand.

He began his law practice in 1949 by representing poor people from his neighborhood, usually free. Dissident longshoremen went to him asking for legal and strategic help in fighting their union, the International Longshoremen’s Association.

Mr. Johnson did not win his battle on the docks, nor his fight with Tammany. But both helped set the stage for later reforms: the union was forced to purge its leadership, and Tammany adopted a fairer, less opaque procedure for electing district leaders.

Mr. Johnson died in Manhattan of pulmonary fibrosis, his son Peter Jr. said. In addition to his son, who was an adviser to Mr. Dinkins and a press aide to Gov. Mario M. Cuomo, Mr. Johnson is survived by his wife, the former Veronica Donohue; another son, Christopher; and two granddaughters.

In later years, Mr. Johnson’s legal clients included Matilda Cuomo, Mr. Cuomo’s wife, as she contested her father’s will. In another case, he won the dismissal of charges against three men who in 1964 fired a bazooka into the East River to protest a speaking appearance by Che Guevara, Fidel Castro’s lieutenant at the time, at the United Nations. Mr. Johnson charged no fee.

Peter Johnson Sr., a legendary rags-to-riches Manhattan lawyer who rose from the West Side docks to the apex of the legal profession as a renowned litigator and political kingmaker, died Dec. 3 after a lengthy battle with pulmonary fibrosis. He was 91.

Confidant of governors and mayors, maker of judges, scourge of Tammany Hall, feared and respected adversary, role model to generations of lawyers, decorated Marine and philanthropist, Johnson, a founding partner in Leahey & Johnson, was, in the words of his son Peter Johnson Jr., “an unorthodox force of nature.”

“He was just a tremendous lawyer who loved being a lawyer and loved helping people, and a very tough guy, a very strong guy,” Johnson Jr. said. “He was not afraid to state simply and boldly what he believed and speak out about what he perceived to be injustice.”

Johnson Jr., who had been accompanying his father to court since he was 8, said his father’s eloquence and style set the standard for jury presentations.

“He would quote poetry and Aesop’s fables and scripture, and talk about heroes in modern life,” Johnson Jr. said.

Chief Judge Jonathan Lippman (See Profile) called Johnson Sr. “a giant in our profession” and a “legend in his own time” who “represented a generation of lawyers who built their practice from the ground up and rose to the pinnacle of the profession.”

“He was known not only for his legal talents, which were many, but also his devotion to the law and the best interests of the profession,” Lippman said. “He will be sorely missed by our profession and by all those who knew him for his wonderful legal talents and engaging persona.”

At the age of 17, when his father died, Johnson went to work as a stevedore on the lower West Side docks to help support the family. He later became a New York City police officer, and then enlisted in the Marine Corps during World War II. Johnson was grievously wounded during the Battle of Iwo Jima and spent a year in military hospitals before resuming his duties as a police officer.

While serving with the NYPD by day, Johnson studied law at night and earned his degree from St. John’s University School of Law in 1949. He began representing dock workers and fighting for the rights of laborers who often found themselves between the rock of Tammany Hall and the hard place of organized crime.

Johnson Jr. said his father took on notorious Democratic boss Carmine DeSapio in the early 1950s, and while his battle with the machine ultimately led to important electoral reforms, he was blackballed in Manhattan and essentially banished to Brooklyn, where he reestablished his practice.

Johnson successfully defended the 42nd Street Development Project from a constitutional attack brought by an adult bookstore, represented Governor Mario Cuomo in personal matters and served on a mayoral blue ribbon commission that investigated and reformed the New York City Health and Hospitals Corp. He was an unofficial gubernatorial and mayoral adviser in various administrations and advocate for merit selection of judges.

“There are so many judges in this town who were made by Peter,” said one jurist. “He was very influential. He was the gatekeeper in terms of appointments to the appellate bench.”

Betty Weinberg Ellerin, who sat on the Appellate Division, First Department, said she first encountered Johnson more than 50 years ago when she was a law clerk for Supreme Court Justice Harry Frank and he was already a revered legal superstar.

“He was truly and throughout his life and career a larger than life personality, an extraordinary lawyer who utterly owned the courtroom when he was on trial,” Ellerin said. “He not only had extraordinary command of the facts and the law but also connected with jurors in a terrific way.”

Ellerin said Johnson had an insatiable thirst for justice and viewed any injustice as a repulsive, personal insult.

“As a human being, in my book, second to none,” Ellerin said. “If there was an injustice at hand, Peter couldn’t tolerate it and would fight it to the nth degree. Peter could, I suppose, sometimes come off as gruff, but he was one of the kindest people I ever knew.”

Ellerin said Johnson influenced a great many judicial careers, including her own.

“He was the kind of guy people took to and his opinion was frequently sought by the powers that be,” Ellerin said. “He was very helpful to me in the early days. He guided me in certain ways, suggesting I get involved in certain activities.”

One friend said Johnson’s annual Christmas party, attended by some of the highest ranking public officials in the state and city as well as his most humble clients and their children, defined a man who moved as comfortably with the high-brow society he joined as a successful lawyer and the working class people from childhood roots he never quite left behind.

Johnson, a devoted Roman Catholic, was a longtime Knight of Malta. He was a former trustee of LaSalle Academy and Our Lady of Victory Church in lower Manhattan and a former president of the Brooklyn, Manhattan Trial Lawyers Association.

In addition to Peter Jr., a member of Leahey & Johnson and a Fox News Channel legal analyst, Johnson is survived by his wife, Veronica; another son, Christopher, president of the charitable Johnson Foundation; and two grandchildren.